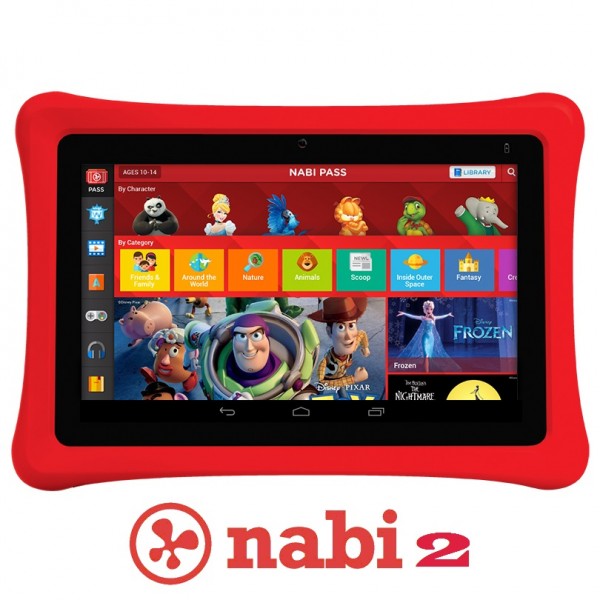 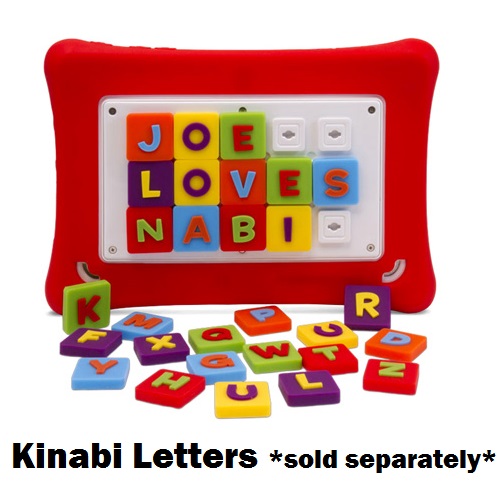 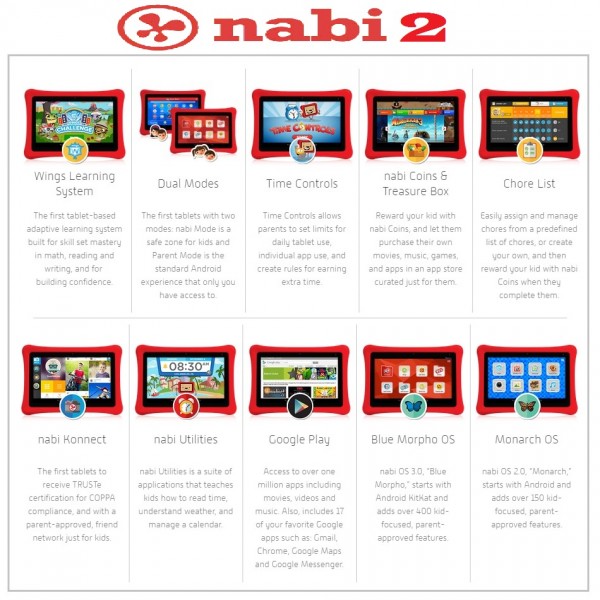 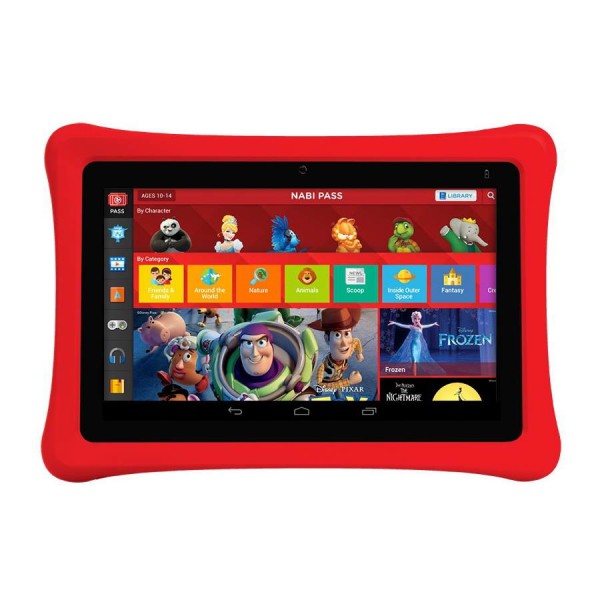 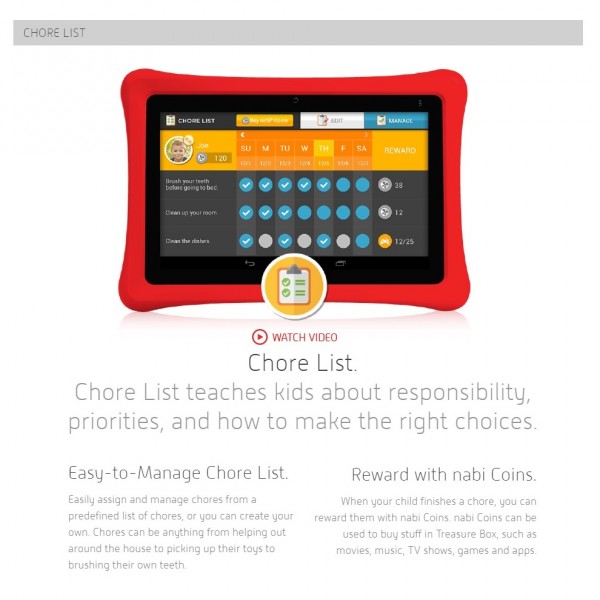 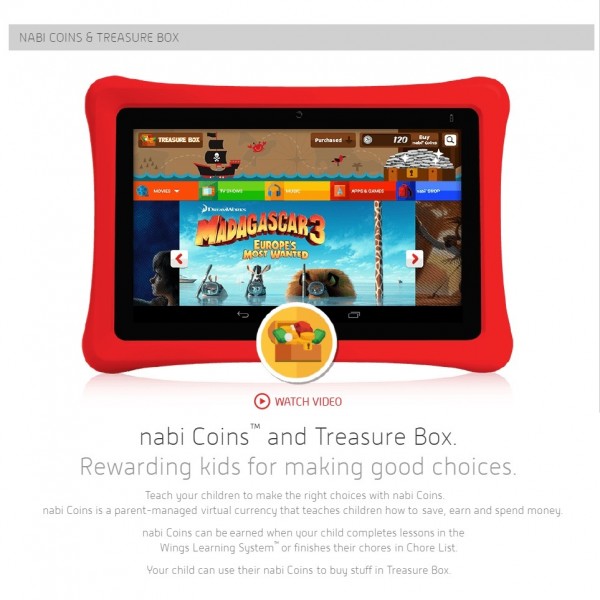 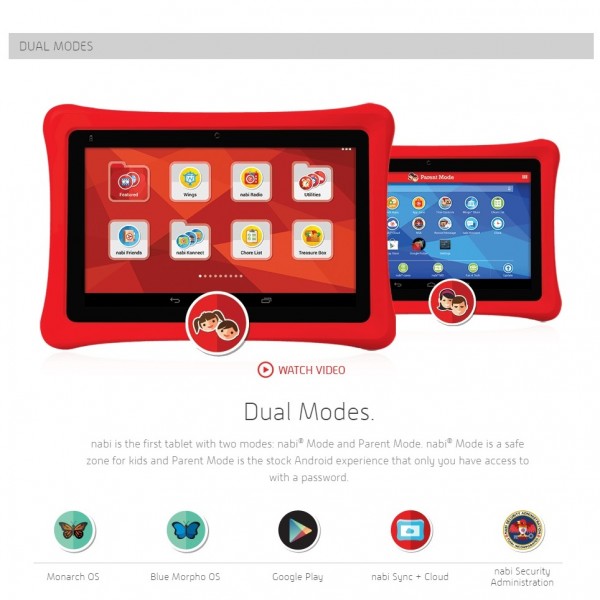 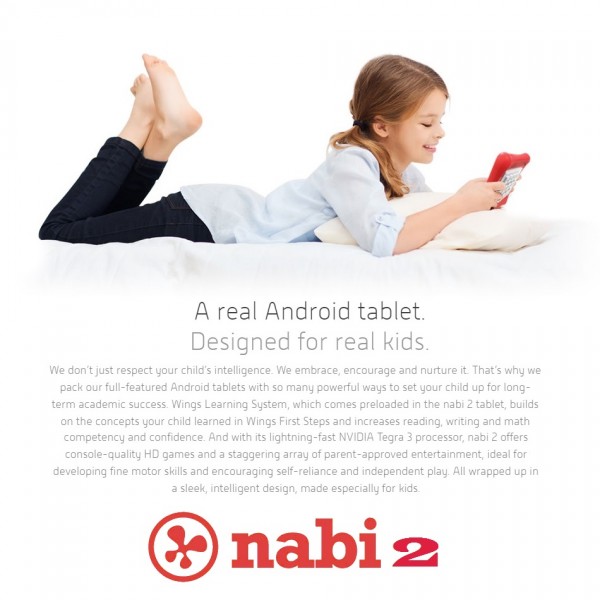 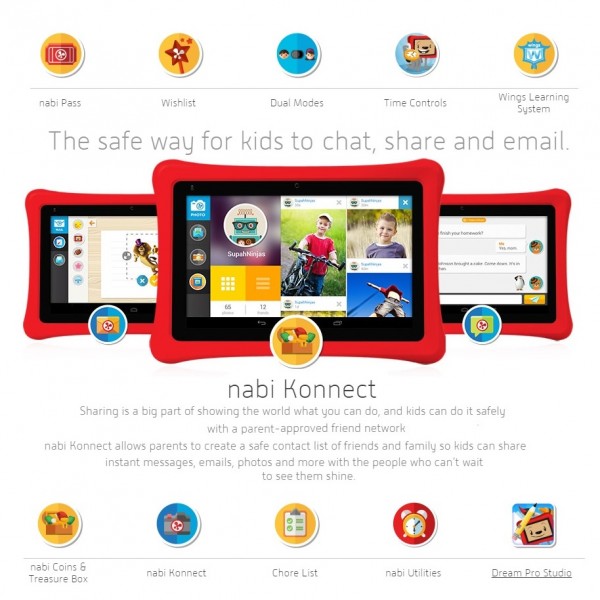 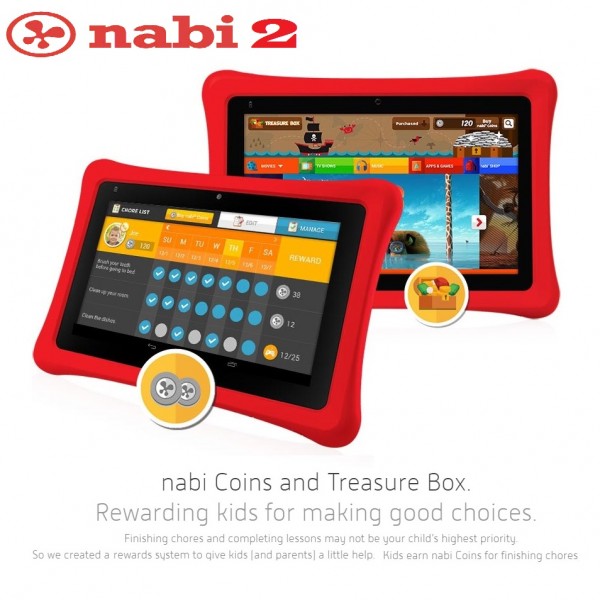 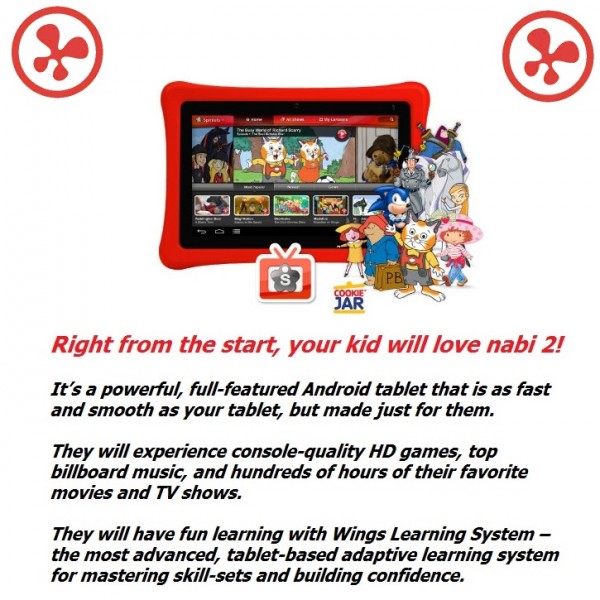 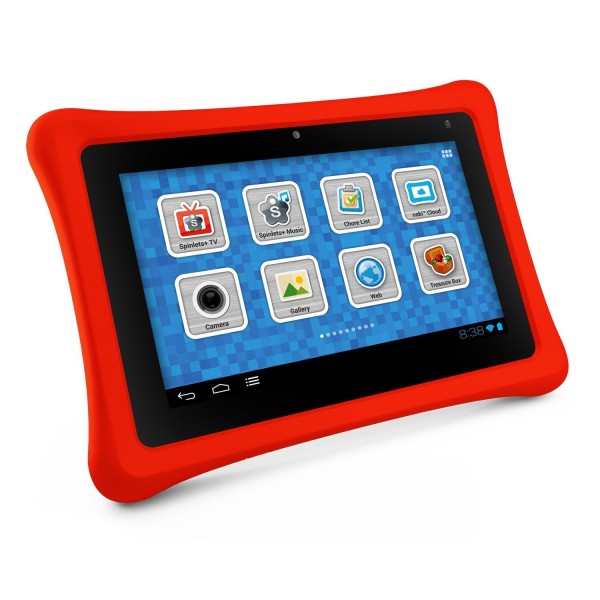 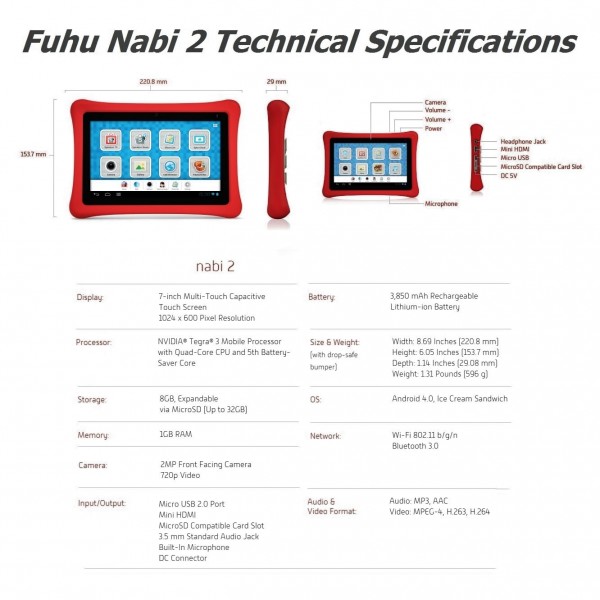 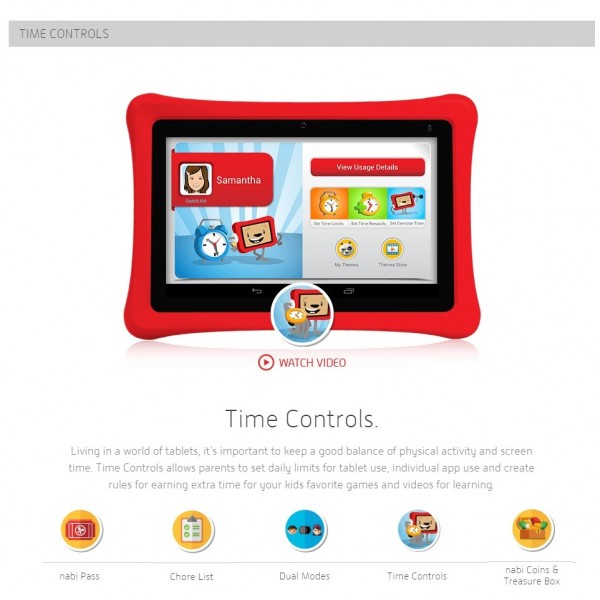 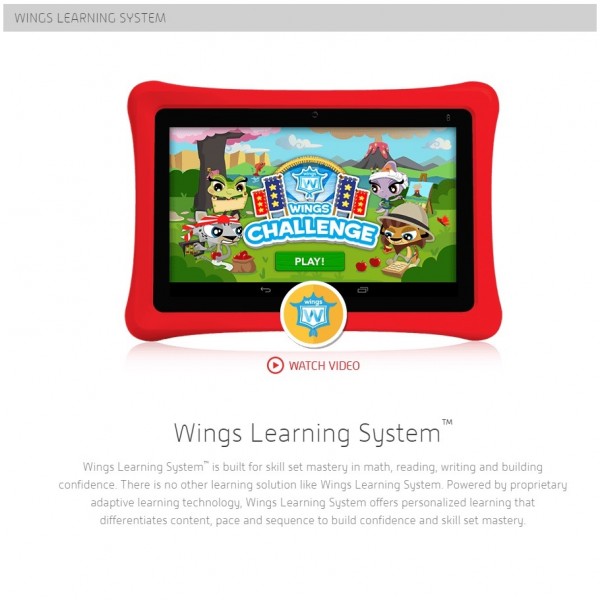 Powered by a quad-core Nvidia Tegra 3 processor and preloaded with plenty of compelling children’s content, the Nabi 2 is fast, responsive, and a joy to use. It bests the other kid-friendly tablets we’ve tested, but it’s also a great full-featured Android tablet that has the chops to take on the Nexus 7 and Kindle Fire HD.

In a world of typically anemic tablets designed for children, the Nabi 2 is a revelation, powered by a beefy quad-core 1.3GHz Nvidia Tegra 3 processor—the same chip found in the Nexus 7. The Nabi 2 is fast and responsive, and gaming performance is in line with other Tegra 3 tablets. The bump in speed and performance over the kid-focused competitors like the Kurio 7 is significant. Where those two tablets can be frustratingly slow or unresponsive, the Nabi 2 simply flies through any task thrown at it, from media playback to high-end gaming.

Fuhu’s child-safe Android ecosystem, dubbed Nabi mode, runs on top of Android 4.0.4 “Ice Cream Sandwich” and looks similar to the interface found on the original Fuhu tablet. Nabi mode features bright and colorful backgrounds with big icons front and center. The home screens are grouped by content type, so you have all your games in one place and all your learning tools in another. It looks good and is easy to navigate, regardless of Android experience. You also still get a “Mommy” or “Daddy” mode, which is stock Android. In the adult mode you can create new accounts for kids, toggle which apps are available, and control Web filtering.

As of this writing, the Nabi 2 comes with the Fuhu App Zone 2.0 app store, which offers about 500 approved apps to choose from that are separated into categories like entertainment or education and can also be filtered by age. There’s also access to the Amazon App Store, which offers more than 30,000 apps. Fuhu is currently working to get Google certified, which would also mean access to Google Play and its hundreds of thousands of apps.

Preloaded content is a strength for the Nabi 2. For games, you’ll find staples like Angry Birds, DoodleJump, and Fruit Ninja. There are also some demos of graphically intensive games like Riptide GP and Jett Tailfin Racers, which both played smoothly on the Nabi 2 thanks to its Tegra 3 processor. For music and videos there are two Spinlets+ apps, which offer kid-friendly content like Kidz BOP 20. You’ll have to purchase content from Spinlets, but the prices are in line, or in some cases, less expensive than alternatives like iTunes. There’s also a Videos app in Nabi mode, which is largely composed of Youtube videos and links to videos embedded on various websites.  The preloaded MeeGenius app comes with 30 preloaded chidrens’ books with audio tracks for reading along.

In Nabi mode, kids only have access to a restricted Maxthon-based browser. It comes with ten approved websites preloaded and parents can customize the list of approved sites. Web access is limited to those sites alone, which means you’ll have to manually add sites your kids want to visit. A lot of the icons within Nabi mode also just take you to specific Web pages.

Fuhu includes four primary educational apps: Math, English, Social Studies, and Science. They all feature colorful and easy-to-navigate interfaces—head and shoulders above the educational content offered on the Kurio 7. Math and Science offer activities and quizzes for kids in grades kindergarten through 5, while English only covers K-3, and Social Studies is broken down into beginner, intermediate, and advanced levels, while an online interface allows parents to check in on their children’s progress.

Parents can edit and control a Chore List, which outlines weekly schedules and offers rewards for completed tasks. Kids earn Nabi Coins, which they can spend on new apps for their tablet. Parents can vary the coin rewards and kids can browse apps on their own, but must also get final parental approval before installing.

Nabi Sync and Nabi Cloud are two new services that allow parents to wirelessly sync and back up data on the tablet. Nabi Cloud comes with 2GB of free storage.

With the recent introduction of FreeTime, a sandboxed environment on the Amazon Kindle Fire tablets, the Nabi 2 is a remarkably full-featured tablet in a kid-friendly body.

It’s ruggedly built to withstand the rigors of playtime, and comes with a bevy of genuinely compelling games, educational apps, and useful tools for parents.

On top of that, it’s built with the same components of higher-end tablets, and even beats some with the inclusion of both micro USB port and mini HDMI out.

Add in future access to the Google Play market and you have a top-notch tablet that will not only occupy your kids now, but has the potential to grow with them in the future.

Web, Movies, Books, Cartoons –all synchronised with your computer or laptop

As the world’s first full-featured Android tablet made especially for kids, the nabi delivers a wide range of experiences to engage, entertain and educate kids including kiddified Web browsing, watching movies and TV shows, reading books, learning math and playing games. Because nabi is a true tablet, it grows with kids over time rather than being discarded like toy tablets. It’s also full-featured enough for parents – with the tap of a button and a password, parents can enter Mommy Mode for full Web and app store access. Utilizing the nVidia Tegra 3 Quadcore processor and Ice Cream Sandwich 4.0 Operating system, the nabi is very fast. Enjoy movies and read e-books on the 1024×600 resolution screen. Kids have access to a full curriculum from Pre-K through 6th grade to learn and parents can track their growth. Synchronize with your home computer or laptop easily with the nabi synch application. 2G of free nabi-cloud for storage.

Around back is a grid of 15 raised squares set up in three rows of five. Fuhu calls the squares Kinabis and says they can be used to personalize the tablet. The company sells an alphabet’s worth of rubberized color letters designed to attach to the Kinabis, so kids can label their Nabi 2s with their own names.

The Nabi 2 comes with a whole host of apps right out of the box that will keep both parents and kids happy for quite some time. In Mommy mode, you get access to the aforementioned Amazon Appstore, Nabi App Zone store, iHeart Radio, Skype, Zinio for magazines and more. Games include “Fruit Ninja HD,” “Band Bang Racing,” “Burn the Rope,” “Blast Monkeys” and a slew of others.

With more than 50,000 apps in the Amazon Appstore and 500 kid-friendly apps available in the Nabi App Zone, not to mention the more than 100 apps the Nabi 2 has pre-loaded, you should have plenty of options to keep everyone busy and having fun.

In addition to games and learning activities, the Nabi 2 also comes with Spinlets+ TV, which offers more than 700 hours of streaming Saturday morning cartoons

Spinlets+ Music gives kids access to more than 9,000 children’s albums, such as Kidz Bop, Disney, Nickelodeon and more. The MeeGenius app features hundreds of children’s books. You get 28 books out of the box and can choose from more than 100 additional titles.

The Nabi 2 has a 2-megapixel front-facing camera. Photos were clear and artifact free, and Video also proved to be relatively sharp. In addition to the standard Android camera app, Fuhu included Pencil Camera, which automatically makes any picture you take look like it was sketched using a pencil. Kids can import photos into the Fooz Kids Book app to create their own digital scrapbooks.

What’s in the box?